Turkmenistan and the Guinness Book of Records

The great achievements of Turkmenistan, a country with developed economies of spiritually wealthy Turkmen citizens, attract international attention. This is evidenced by the excellent carpets and structures that entered the Guinness World Records in recent years.

The total area of the giant carpet woven by the carpet factory in Bakharly is about 301 sq.m. Its size is 14 × 20 meters. For every square meter of carpet there are 304 thousand knots. Total carpet 120 million knots, and the weight of the carpet is 1.5 tons.

The carpet was woven by forty carpet-makers for 8 months and is dedicated to the 10th anniversary of Independence of Turkmenistan.

In 2013, a giant carpet woven by Turkmen carpet weavers was recorded as the world's largest carpet and is listed in the Guinness world record book.

On June 29, 2008, the State Flag of Turkmenistan, established along Archabil Avenue opposite the State Museum, was listed in the Guinness world record book. This flag weighing 420 kilograms, measuring 52.5 by 35 meters, was fixed to a specially installed flagpole and raised to a height of 133 meters under the sound of the State Anthem of Turkmenistan.

The bronze figures of Oguzkhan and his six sons set at the crossroads of the avenue leading to the Ashgabat international airport and the fountains, the fine architectural and sculptural complex located there, are one of the creations recorded in 2010 in the Guinness World Records.

The total area of the complex is about 14.82 hectares, it consists of 27 simultaneously illuminated and splashing fountains depicting constantly changing patterns. 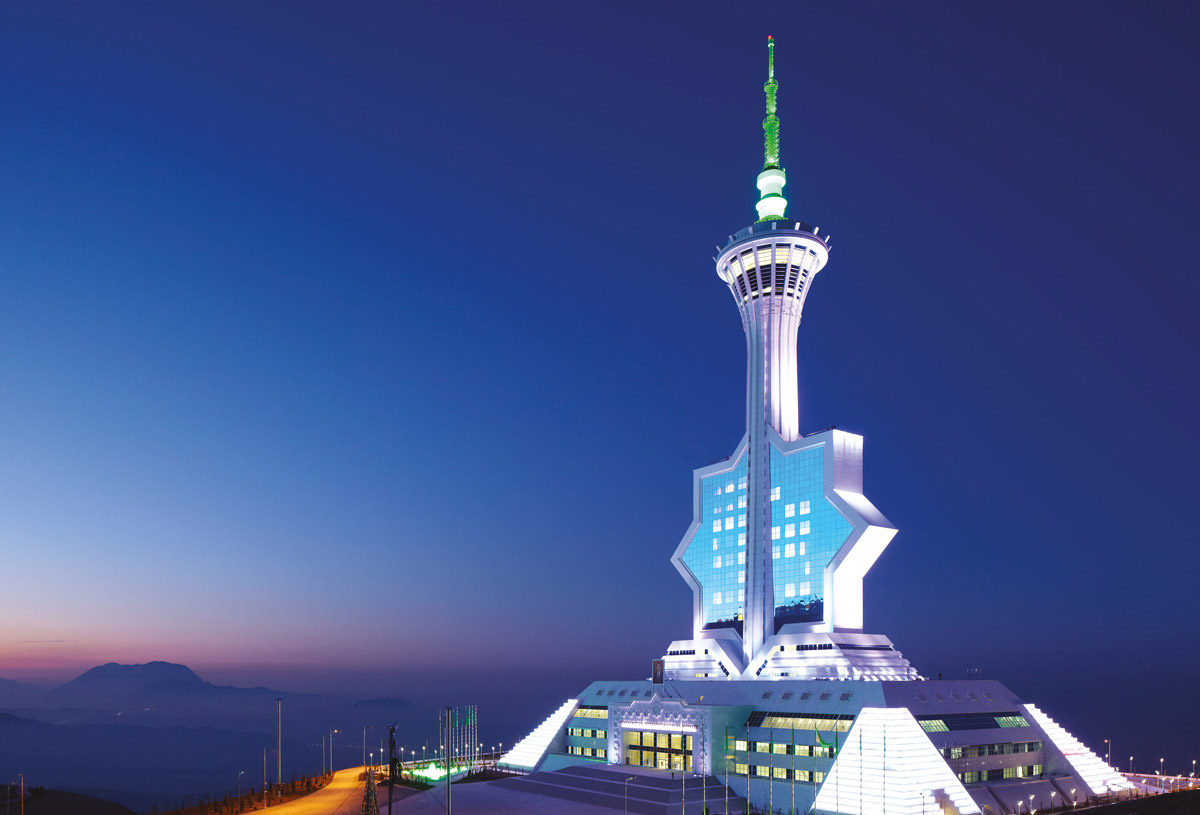 On October 17, 2011, the building of the TV and Radio Broadcasting Center "Turkmenistan" was entered in the Guinness Book of Records. The building resembling a huge star Oguz Khan in the architectural world is considered the largest image of the star. It was built in the south of Ashgabat on a hill near the slope of Kopetdag Mountains. The height of the antenna of the modern Teleradiocenter is 211 meters. The main structure of the complex consists of the 31st floor, on the 29th floor of which is a revolving restaurant. From this point, the white marble capital of Turkmenistan and its outskirts are visible as in the palm of your hand. For viewing the beauty of Ashgabat and the gorges of the Kopetdag mountains there is a terrace of the TV and radio center. It allows you to view the scale of transformations in the capital and enjoy its incomparable beauty. 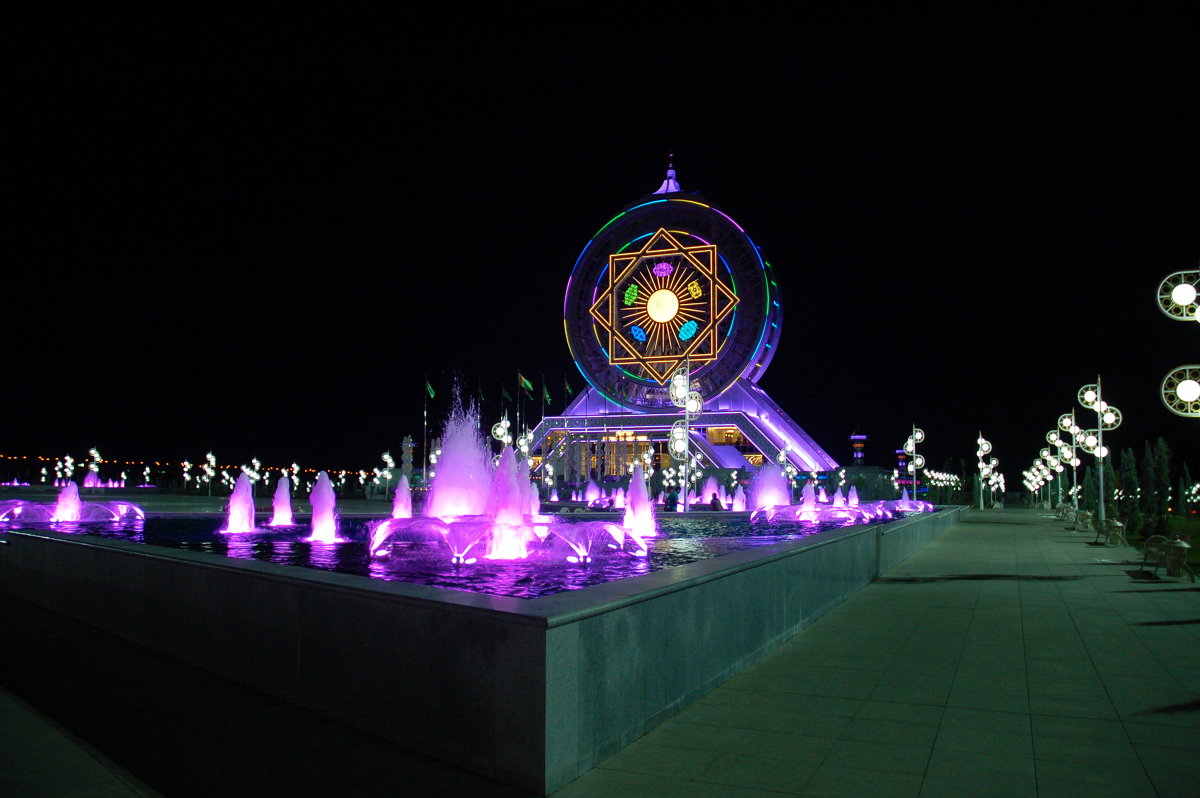 May 18, 2012 with the participation of the distinguished President in the south-western part of the white marble city of Ashgabat, the cultural and entertainment center “Alem” was opened. The cultural and entertainment center “Alem” with a total area of 26,000 square meters, 95 meters high, is notable for its beauty and splendor. On the second underground floor of the building there is a covered parking for 177 cars and technical facilities, on the first underground floor there is a bowling hall, a museum of Cosmos, a cafe-bar for 80 seats. At the entrance to the first floor, the hall of slot machines attracts attention. There are a variety of computer games. On the third floor there is an entrance to the Ferris wheel. On it are technical rooms. On the fourth floor - landing in the Ferris wheel, and the fifth floor entirely consists of a Ferris wheel, its diameter is 57 meters. It has 23 six-seat, 1 four-seater VIP cabin.

September 17, 2016, with the participation of the distinguished President and numerous foreign guests who arrived, the opening of the main air gate - the new International Airport of the capital - took place. In Central Asia, a very large and technological new air terminal complex occupies an area of more than 1200 hectares and consists of more than 100 facilities, of which 48 are the main ones. Among them - the main passenger terminal, the second terminal, the cargo terminal, the hangar complex, the air traffic control service, the Civil Aviation Training Center, the medical center and many other facilities. The five-story building of the main international passenger terminal has an area of more than 190 thousand square meters. The terminal capacity of this terminal is 14 million passengers per year, and taking into account the capacity of the second terminal (3 million passengers), the total capacity of the airport reaches 17 million passengers per year or more than 2,000 passengers per hour. Cargo handling capacity of cargo terminal with an area of more than 17 thousand square meters. meters, is 200 thousand tons of cargo per year. The airport has two runways, each of which is 3,800 meters long. The air traffic control service is provided with the most modern navigation equipment. The Guinness Book of Records included the largest carpet pattern “Göl” with an area of 705 square meters. meters, decorated the roof of the main passenger terminal.

In November 2015, at the opening of the concert hall of the city of Mary, built in the form of a giant yurt, with the participation of 4 thousand people a big festive event took place. They sang in unison the song of the respected President “Forward, forward, only forward, beloved Motherland - Turkmenistan!”. Because of the large number of people who performed this song, it was recorded in the Guinness Book of World Records as a world record.

As a result of the consistent efforts of the distinguished President, the image of our capital Ashgabat is changing beyond recognition and becomes one of the most beautiful cities in the world, creating conditions for a favorable stay. So, the main city of the country and constructions of various purposes built in its borders are recognized internationally by its modernity, original architectural solution and unique design. Evidence of this is the recent good news about entering in the Guinness Book of Records just two objects of the Olympic town. 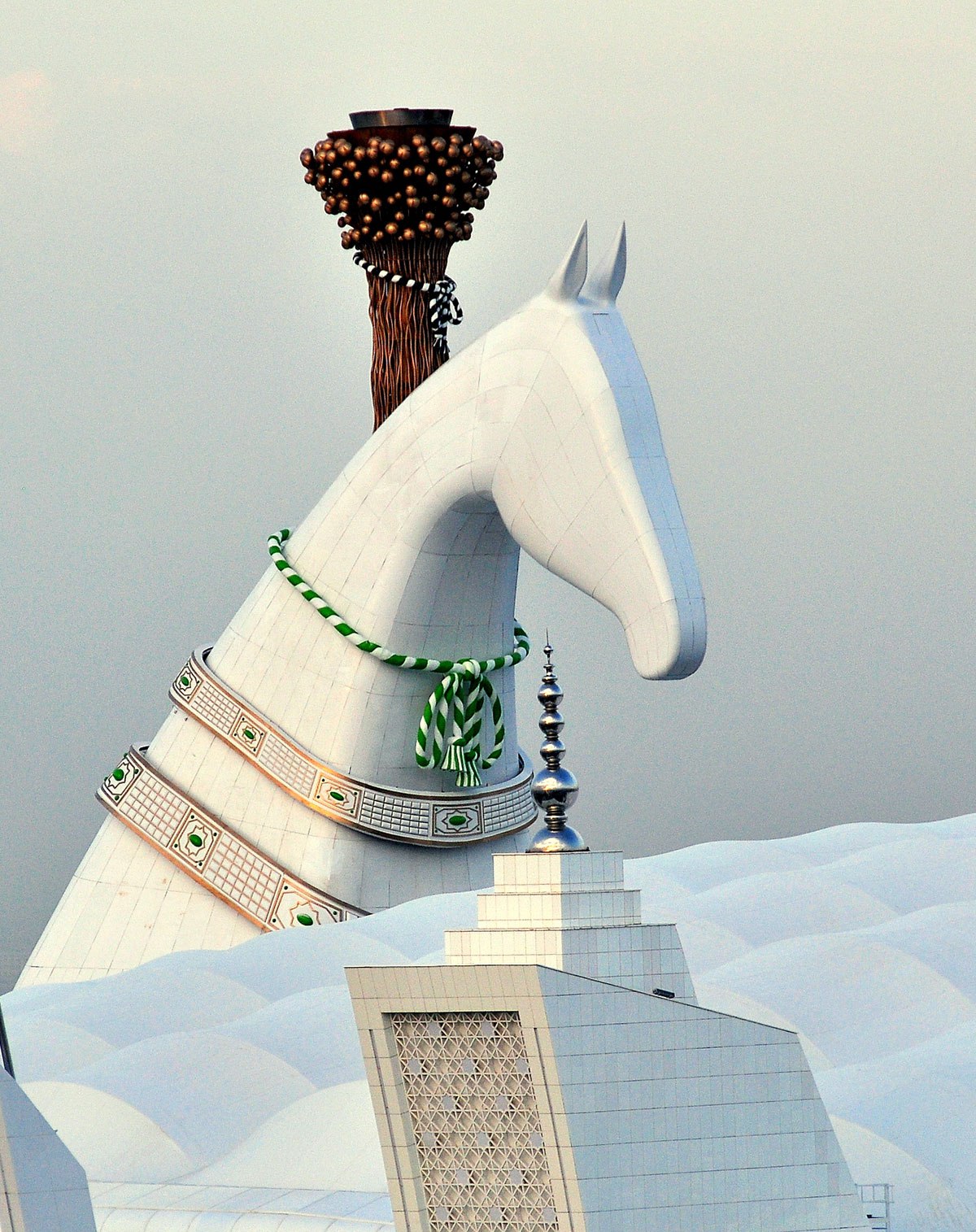 Representatives of the company "Guinness World Records" recorded some large-scale objects of new beautiful places in Ashgabat. In accordance with the certificates confirming this, in the Guinness book of records are entered; decorating the rostrum of the Olympic Stadium artistic image of the Akhalteke horse as the world's largest horse emblem, and the Olympic Sports Center as the world's largest indoor swimming pool, meeting the highest requirements, made of environmentally friendly materials, built on the basis of modern technology.

On June 3, before the mass bike ride, the official representative of the company “Guinness World Reсords” Shayda Subashi, announced the registration of a new world record at a training on cycling, held on June 1, 2018 in the multifunctional capital Ashgabat stadium. The event was attended by 3246 people. The participants of the lesson were practiced in cycling, were informed about the role of this mode of transport in the conditions of modern logistics, as well as the rules of safe driving on city streets. To date, this is the largest number of people training in cycling.

This record by the company “Guinness World Reсords” was officially registered and confirmed with the appropriate certificate.

In addition to the honouring of the winner of the race during bright events on Caspian coast on occasion of the closing ceremony of International rally Amul – Hazar 2018 initiated by President Gurbanguly Berdimuhamedov, another event, which would enter the history, took place.

The Head of the State and all participants of the celebration were presented with the certificate of inclusion of horse Akhan from Ahalteke Equestrian Complex of the President of Turkmenistan to the Guinness Record Book. Unusual abilities of the horse has been officially registered – it managed to pace rearing 10 meters for 4.19 seconds rearing, having beaten previous record in this unique nomination by two times. .

Besides the jury – the representatives of the world known publication, who has registered similar record in the past, numerous spectators of the celebration in Avaza were also able to see the absolute pattern of this record with their own eyes. Having bowed to the public with artistry and honour, Akhan easily reared and walked gracefully in vertical position for some distance.

Delighted foreign guest literally jumped from their seats trying to capture this incredible performance with their gadgets. Exclamations of surprise and rapture sounded in different languages from everywhere. Such impressive abilities of Akhan are not something unusual for Turkmenistan citizens who know very well what heights these horses are able to reach if they are bred by talented coach. Akhan is under patronage of Head of the State himself, who is skilful and experienced horse rider, coach, connoisseur and professional in horse breeding art.

This record is another evidence of the efficiency of huge supporting activity of the President of Turkmenistan in revival and succession of wonderful traditions of national horse breeding. Historians consider ahalteke horses were the first breed, which development was done with direct participation of people. Selection of this pedigree horses has started in the III millennium BC on the territory of Ahal Oasis in Turkmenistan. This place gave the name to Turkmen horses. The breeding of ahalteke horses is made inside the flock without admission of the blood of other breeds.

The Head of the State put invaluable efforts in protection and improvement of the glory of ahalteke horses. Turkmenistan turns into international centre of pedigree horse breeding and our horses and jockeys become the winners of big reviews, prestigious equestrian competitions and race tournaments abroad.

This is also indicated by number of outstanding victories of national equestrian group Galkynysh on the world circus festivals. Their performance embodied luxury royal grace of ahalteke horses and their outstanding training, which is the result of painstaking efforts of the coaches.

Achievement of Akhan from Ahalteke Equestrian Complex of the President of Turkmenistan has added another expressive touch to the portray of Turkmen horse, another pearl drop to shining crown of its everlasting glory, which was originated in ancient times and, having travelled around the world, comes back in new splendour owing to the efforts of the Head of the State.

It is symbolically that this pleasant event – the award of the certificate on inclsion of Akhan to the Guinness Record Book, fell on the ceremony in honour of the winners of International rally Amul – Hazar 2018.

This project was based on the idea of revival of the Silk Road, which received big impulse for development from ahalteke horses, which were used to lay new routes of this legendary road , to accompany trade caravans and to send messengers.

Meanwhile, the horse was not only the mean of transportation for Turkmens, literally it was a family member, subject of great care and affection. No wonder people say that the horse is a wing of a soul!

Opened and commissioned on June 28, 2019 in Akhal velayat, the newest modern industrial complex for the production of gasoline from natural gas attracted the attention of Guinness World Records for its economic and innovative features. At the opening ceremony of this complex, the official representative of the company “Guinness World Records” Ms. Shade Subashi-Gemidzhi spoke. She wholeheartedly congratulated the respected President and the entire Turkmen people on the occasion of the commissioning of a unique industrial enterprise - the first such facility in the world.

Mrs. Subashi-Gemidji presented the Certificate “The world's first plant for the production of gasoline from natural gas,” wished the distinguished President of Turkmenistan good health and success, and the Turkmen people prosperity.

On August 8 of 2019 year, in the city of Turkmenbashi was held lesson of ecology, which was organized by the Government of Turkmenistan. This large-scale lesson of ecology, which fell into the Guinness Book of World Records, was attended by three thousand people. Within the first Caspian Economic Forum, the representative of Guinness World Records, Mrs. Sheyda Subashi-Gemiji, in a ceremonial atmosphere, handed to the Turkmen side the appropriate certificate.

Central Commission for Holding Elections and Referendums in Turkmenistan © 2020. All rights reserved.

When using the materials the reference to saylav.gov.tm is compulsory